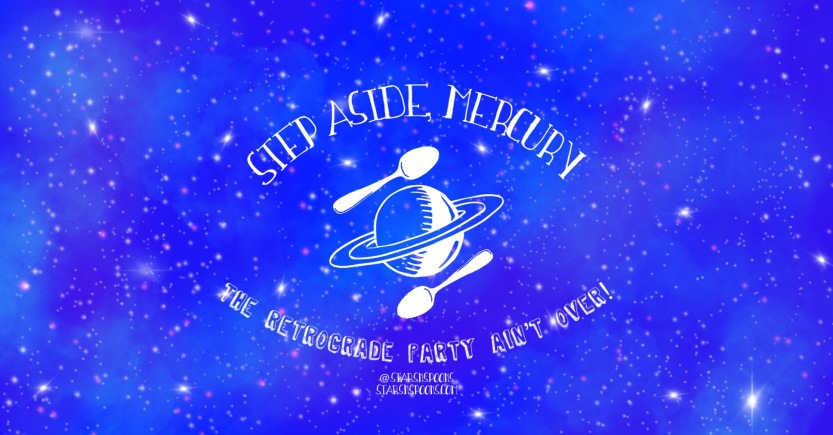 Hi fellow stargazers, long time no…blog to you? I’ve been in a bit of a whirlwind since starting a fabulous new job, and generally coping with autoimmune crap. Mostly things have been really good, I just haven’t had many leftover spoons for anything.

I wanted to write a lil something about the energy going on…while my personal life is going well, there’s this heaviness in the air. Things seem kinda bumpier and tougher than usual. Astrology aside, things are pretty wretched in the world—things are very grim here in the USA, as ICE detains people in concentration camps. It’s hard not to feel that every day, and we should not turn our backs on those feelings or what is happening.

This is an astrology and tarot blog, why are you talking about politics? 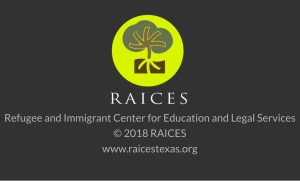 Because it’s my blog, and I DO WHAT I WANT. (Donate to RAICES help Immagrants with legal fees & more)

On top of the dismal state of world affairs, we have a LOT of retrograde action happening, as well as mercury retroshade, all of which can add to the heaviness in the air.

Partly we are in the shadow of mercury retrograde. This means we’re reviewing what went on the past month, and things are still murky with communication & tech. With retroshades we’re reviewing the review—what we learned during the retrograde review.

With Jupiter retrograde ending August 11, we’ll be reviewing all that we’ve learned and experienced the past year of Jupiter direct. How did we grow? How do we want to grow and expand in this next Jupiter cycle? 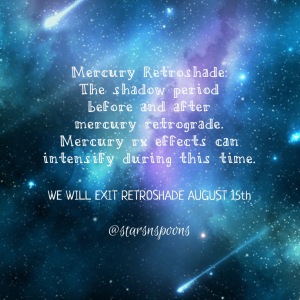 We are still in the midst of Saturn retrograde until September 18th. With Saturn rx we lose some momentum and hit some roadblocks as Saturn asks us to review our responsibilities and whether we’re making choices in alignment with our true paths. This can feel frustrating, especially if we resist taking time to look at what we’ve been up to, how we’ve been accountable, and how we are feeling in our responsibilities and roles.

We are still in the thick of Neptune retrograde until November 27th—this can be both an awesome retrograde, and a difficult one, as our dreams come into the light for review. Sometimes Neptune retrograde shows us which of our fantasies are just that, and which ones can be merged with reality. Ways in which we’ve been deceiving ourselves, or not facing where others are deceiving us can come up in these months, too. I tend to feel energetically heavier during Neptune rx, as I tend to spend a lot of time in fantasy land (my Neptune is in Sagittarius, so my imagination runs wiiiiild). Literal dreams during sleep can be unpleasant or murky and weird during this retrograde too.

Pluto is still retrograde, and remains so until October 3rd. When Pluto is retrograde, the investigative energy turns inward, and we explore our shadows, including our unpleasant underbellies. This can be a rough period at times, especially if you tend to stuff things down. Pluto retrograde will nudge you to open those doors and clean out those skeletons.

We are still in the earlier stage of Chiron retrograde, which will go direct December 12. Chiron is the “wounded healer” planet. While retrograde in Aries Chiron asks us to review old wounds and pain, so that we can heal and move forward. Chiron in Aries urges us to step into our power and stand up for ourselves.

With all of this review energy, we can go to some dark places, so I urge everyone to reach out to loved ones regularly, especially when it’s hard and you just want to isolate. Remember that it’s important to do things that are fun. Remember that we ALL have shadows, and parts of ourselves that are hard to face. You are not alone. (I’m talking to you, Aquarians/Aqua Risings/Aqua moons, especially! You’re not alone) Retrogrades don’t have to be “bad,’ and I don’t say all this to be a downer or predict anything. I just think 5 retrograde planets at once can be heavy at times, and it helps to be aware of that so we can UP the self care, and be gentler with ourselves.

Written Tarotscopes coming soon, and in the meantime you can check out some of the videos on YouTube (been doing these when I don’t have the spoons to write and edit) here: StarsNSpoons YouTube

Check back soon for full moon tarotscopes and astrology talk!